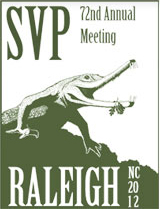 The 72nd annual meeting of the Society of Vertebrate Paleontology was held in Raleigh, North Carolina, USA (October 17 – 20, 2012). More than 1,000 attendees interested in various facets of the discipline of vertebrate paleontology - such as the biology of long-extinct dinosaurs - presented and discussed their latest scientific advances.
For instance, we now have new clues about one of the biggest enigmatic events during evolution of life: the origin of jaws. A recent study shows that the evolutionary change from jawless to jawed vertebrates can be clearly traced by 400 million years old, transitional fossils.

The Mesozoic Vertebrates Group at the Bayerische Staatssammlung für Paläontologie und Geologie in Munich, Germany, was involved as well in crucial contributions to diverse aspects of reptilian evolution. Almost all members presented and discussed their recent research results.

We addressed the question of how to explain the diverse neck lengthening in dinosaurs?
Christine Böhmer and colleagues provided a first-time glimpse at genetic expression during the embryonic development of long-extinct fossil dinosaurs in order to understand the evolution of neck length.
A re-evaluation of phytosaurs (extinct crocodile-like reptiles) from Central Europe by Richard Butler and colleagues gave new insights into the ancient ecosystem of these animals.
On the trail of the famous german paleontologist Ernst Stromer. Serjoscha Evers and colleagues reported on an enigmatic theropod dinosaur from northern Africa.
As a result of the work by Martin Ezcurra and colleagues we have new information about the Triassic-Jurassic mass extinction event (about 200 millon years ago) that had a deep impact on the early evolution of theropod dinosaurs.
Christian Foth and colleagues illustrated their results on the evolutionary history of the Mesozoic flying reptiles, the Pterosauria.
Albert Prieto-Marquez and colleagues talked about potential triggers for the diversity peak of megaherbivore dinosaurs in the Late Cretaceous.
Oliver Rauhut and his colleague Diego Pol presented a new theropod dinosaur from Patagonia, Argentina. The skeleton of this huge animal is the most complete tetanuran from the early Middle Jurassic.
Roland Sookias and colleagues talked about trends in tetrapod body size evolution and concluded that biological limits , not environmental limits, become increasingly limiting as larger sizes are reached.

In all, the international meeting was a great success not only concerning the promotion of excellent research by the Mesozoic Vertebrates Group but also in encouraging collarboration with associates from all over the world.
Posted by Christine Böhmer at 14:45

Other blogs of interest